Please fill in the form if you would like to join the DPHS Old Boys database connecting you to the school.

The school would love to hear news of any old boys who have achieved honours at a senior international level for South Africa or any other country in individual or team sports. The list below is limited to senior representation. Under 19 or other junior representation is, therefore, not included.

I can identify many of the people, some with total confidence, some with less. I shall list them, giving two asterisks when I am absolutely certain, one asterisk when I am moderately sure. 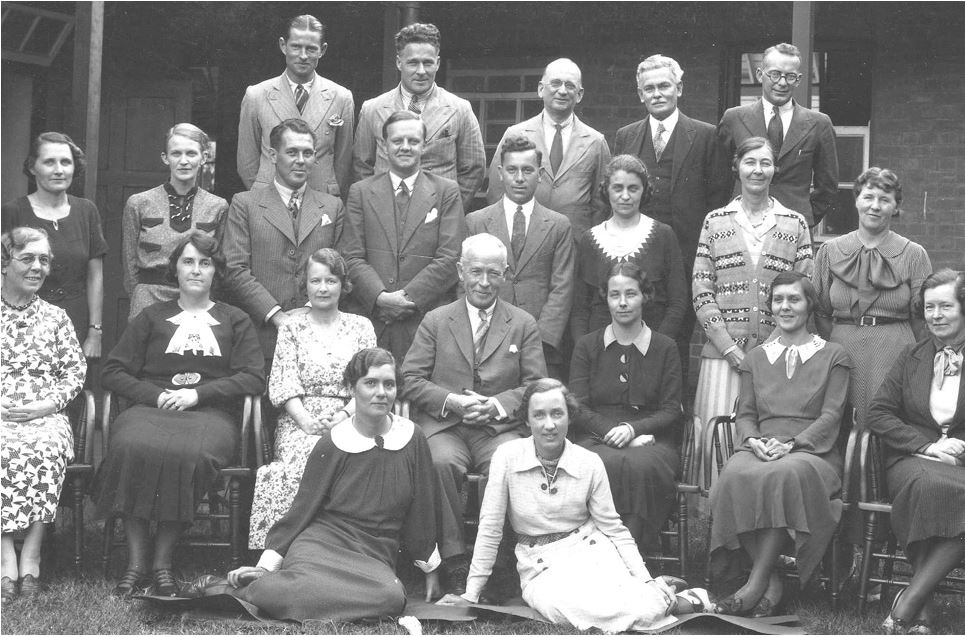 Back Row: l to r: Mr Scofield (or some similar name), who took over as Physical Education instructor at the retirement of Sergeant-Major Wells, who called it “Drill”. Next . . Unknown (Could it be Mr Wilkinson?). Next, Mr. L. B. Durrant**, teacher of Standard Via. Next, Mr. E. I. Wilson**, Senior Woodwork master. Next, Mr. van der Walt**, teacher of Afrikaans.
Middle Row: l to r: Unknown, though possible Miss Ball. Next, Unknown; though just possibly Miss Eve Langley, who taught Std. IVa (daughter of A.S. Langley, sister of Noel). Next, Mr. “Tug” Wilson**. Next, Mr. “Freddy” Shaw**. Next, Unknown. Next, Miss Miller** (with “headphones”) who presided over Std. I. Then two Unknowns.
Front Row: Mrs Surgeson*. Next, Mrs Edwards**. Next, Miss Beanland**. Next, Mr Bullimore**. Next, Miss Fraser**. Next, Mrs Haafin (sp. ?)*. Next, Miss McKenzie**
On the grass: Unknown. Next Miss Dora Jackson** (Music teacher and also teacher of Std. IIIa)

Here, as promised, here are the photographs of my classes in 1944 (Standard IV), 1945 (Standard V) and 1946 (Standard VI). I’m enclosing the original prints with, on the backs, the lists that I wrote at the time. Also, I’ve enlarged the originals with the lists beneath them, making it easier to identify each one of us. I was born in London in April 1933, so I was only 11,12 and 13 in these photos. 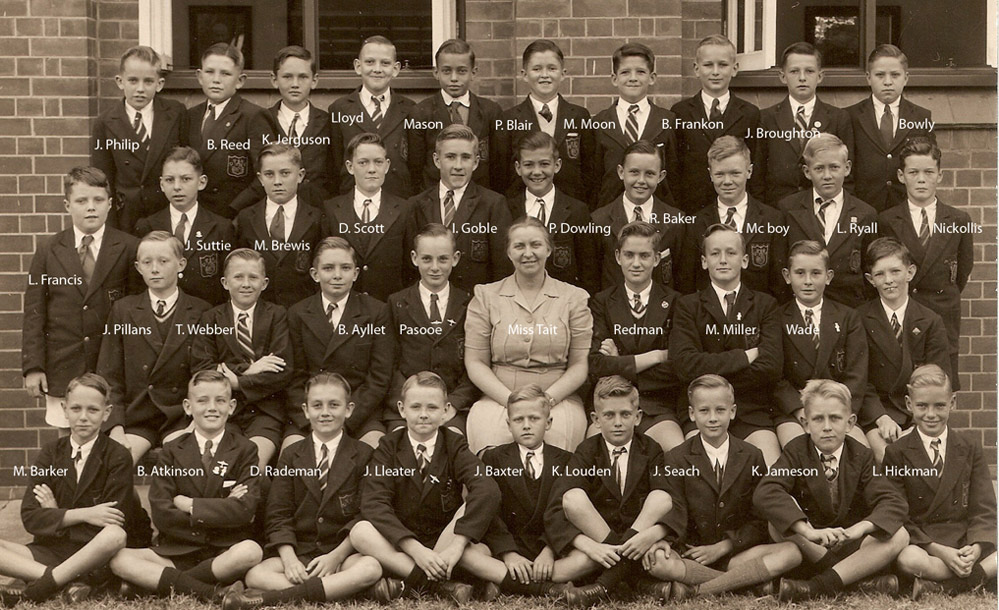 Here, too, is Headmaster Evans’ testimonial for me when I left and returned to England with my mother, brother and sister in July 1946.

As I read on your website the reminiscences/ testimonials of recent students I am reminded of the great loss I felt cutting short my time at DPHS and, subsequently, denying me the opportunity to move on to DHS. I had been there only three years but in that time I had forged strong friendships with boys I would never see again, nor hear from. In particular, I missed Derek Wade and Michael Moon.

During a one-day visit to Durban in February 1975 I took a taxi to visit the old school. I had assumed everything would be as I last saw it 29 years earlier, and was not ready for this stunning contemporary building that now stood in its place. I wandered through the halls feeling so sad, so alien, until I found myself facing a portrait of my headmaster, Dr Evans. I was transfixed! OK, yes, here he is, and here I am. After all these years!

My reverie was broken as a teacher asked if I needed help. I told her I attended classes here in the 1940’s and that this was my first time back – and how sad I was that they had torn down the old school building.

“But we haven’t,” she said. My hopes soared as she took me to where the older building still stood, tucked somewhere around at the back. But it took me a while to realise that here was that huge building I’ve carried in my memory all these years – that it wasn’t so huge after all, just that I was so small! I had to duck down to look into the windows of these tiny rooms with tiny desks.

I then saw the library – a room that had been, for me, the assembly hall. Again I was surprised at how low the ceiling was, and how small the room. It had seemed so huge when we assembled there for morning prayers. The war was still on, and occasionally the headmaster would announce that another convoy of ships from England had been attacked, and several ships sunk. That was our cue to sing “For those in peril on the sea”. Even today, when I hear that hymn, I am back in that school hall with its high ceiling and huge windows.

As I recall, once a week the service, or part of it, was in Afrikaans. But I cannot vouch for this.
Looking at your website, I suspect the old building has since been torn down. Am I right? Do you have any photographs of it and its rooms?

Also, are there any names on my lists that you recognise?

In retrospect, I am so very proud of being “an old boy” of such a fine and well respected school, and I am very glad to send you these original class shots of the 1940s for your archives.

For your archives, I attach four photographs for Standards 3a through 6a from 1953 to 1956. 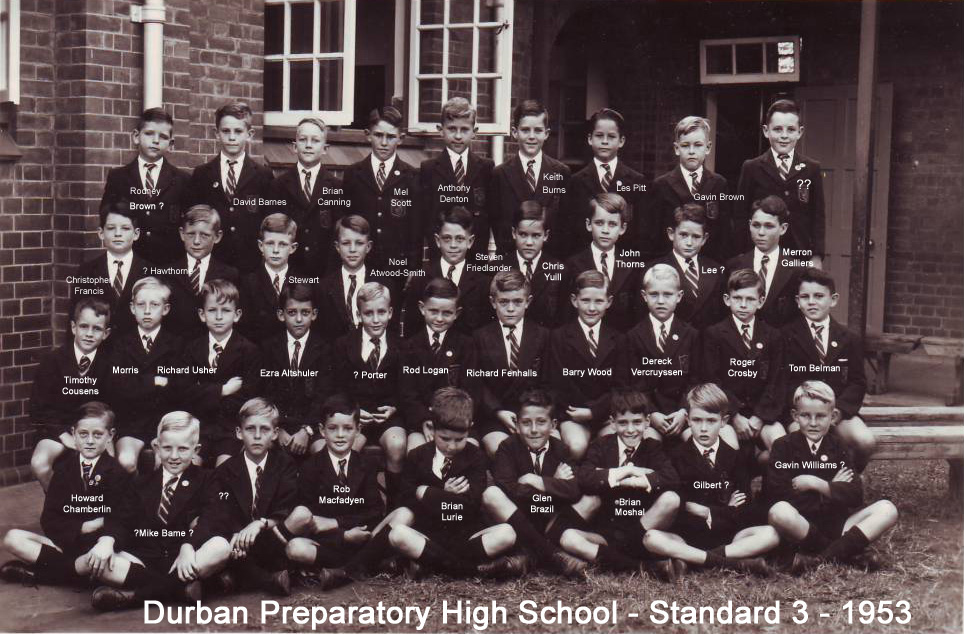 I have been trying to get in touch with my classmates over the last year, successful in locating only 7.

We all treasure the memories of the outstanding education we received from the educational cornerstones of the school:
Mr Wilkinson in Carpentry, Miss Edgerton for Latin and English, Mrs Campbell for Arithmetic, Mrs Tungay who gave us such an amazing grounding in the songs of the world, Mr Walshaw the PT Master, who taught us not to be ninnies, and would deal with misbehaviour by placing the miscreant inside the wooden horse while others vaulted over it.

Mr Lumsden, the Vice Principal, who once returned a note my mother had written to him, with a red circle pointing out a spelling error in her note, and Tug Wilson, the Headmaster. Mr Lumsden administered my first caning (two strokes), for allegedly talking during assembly, which aggrieved me somewhat, as it was actually the boy standing next to me.

As I know from Princeton University, where both my sons were fortunate enough to receive their undergraduate education, ongoing a vigorous contact with alumni is an extremely important part of the long-term success and endowment of the institution.